I’ll let you in on a little secret, dear reader. In those moments when I have doubts, I like to look over the shoulders of great investors to see what they are doing. (Actually, it’s really not much of a secret. It’s a topic I discuss quite openly and frequently. See “When in Doubt, Follow the Greats.”)

Back in grammar school, your teacher might have called it “cheating,” but this isn’t grammar school. It’s the rough-and-tumble real world of investing, and we can all learn a lot from following the trades of great investors. 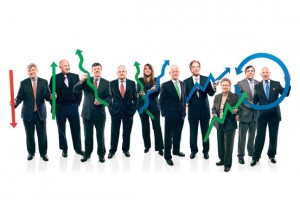 In the June 9 issue of the magazine, Barron’s checked up on the Roundtable to get their investment outlook in light of the turbulence coming out of Europe (see “Caution: Sharp Turns Ahead.”)

Views among the ten panelists run the gamut, but a couple themes showed up with consistency.

The panelists might as well have added that the sky is blue, as these conclusions will come as a surprise to no one. Still, their recommendations for how to navigate the storm are varied and insightful.

Felix Zulauf, President of Zulauf Asset Management, is the most bearish of the bunch. Zulauf notes that stocks are cheap—adjusted for inflation, Italian stocks trade at “levels last seen in Mussolini’s era”—yet that does not guarantee good returns going forward. Zulauf sees the West more or less caving in on itself under the weights of its debts.

Abby Joseph Cohen notes that “Individual investors have had the stuffing knocked out of them” in recent years, which explains their skittishness. No one wants to sit through another 2008 meltdown, so investors tend to sell first and ask questions later.

This has created bargains, however. Like Zulauf, Cohen considers stocks to be cheap by historical standards: “Stocks are selling at low price/earnings ratios [and] companies have strong balance sheets.”

Of course, as Cohen notes, this means nothing in the short-term. Stocks can go from cheap to cheaper.

Meryl Witmer, General Partner of Eagle Capital Partners, has the views closest to my own. Says Witmer, “The exodus from the market has created bargains. You have to stay unemotional and analytical and try to find companies that, in the long run, will generate free cash and increase in value. Usually, when stocks get cheap like this, things get better.”

Witmer takes a play out of Warren Buffett’s book, arguing that you should only buy a company “if the market were to close for 10 years, you would still be happy owning that company.”

I will note that when I have made the biggest mistakes in my investing career, it is usually because I failed to take that advice. You don’t have to actually hold the stock for ten years. You should just make sure that everything you own is something you’d be willing to hold for ten years if the market were to close tomorrow. It’s a sound rule of thumb.

Bill Gross’s comments were particularly interesting. For a man known around the world as the “Bond King,” Mr. Gross is not at all bullish on bonds, noting that “Treasuries are overvalued and getting more so.”

Gross sees roughly a decade ahead of slow growth with the economy on central bank monetary “life support.” Yet he is bullish on select emerging market bonds and, interestingly, Sizemore Investment Letter recommendation Siemens ($SI) and French pharmaceutical giant Sanofi ($SNY)—both European companies in the heart of the sovereign debt crisis.

I’ll wrap this up with comments from “Dr. Doom” Marc Faber.

Faber, uncharacteristically, is surprisingly light on the doom and gloom. Though he expects things to get worse before they get better, he believes that “stock markets are oversold” and that “the U.S. bond market is overbought.”

So there you have it. The All Star team is cautious, but they’re not exactly running for the hills either. By and large, they are recommending selective buying on dips, particularly of high-quality, dividend-focused equities.

Sound advice, I would say.