In pre-republican France, upon the passing of a sitting monarch the Duc d’Uzès would proclaim “The King is dead. Long live the King!”

The idea, of course, was that a new king was rising up to take the place of the old. The Crown as an institution was alive and well; it was just that the head under it had changed.

I was thinking about this as I read a headline in today’s Financial Times: “‘Cult of Equity’ said to be dead.“ 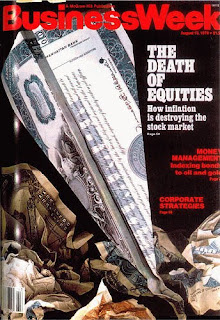 The FT quotes Alister Hibbert, one of Europe’s leading fund managers, as saying “I think the cult of equity is dead.” This follows similar statements last week from Citi’s equity strategists that an “immediate reincarnation of the equity cult seems unlikely.”

Whenever one hears “equities” and “dead” in the same sentence, it’s tempting to draw parallels to the oft-lampooned August 1979 BusinessWeek cover that announced the “Death of Equities.” More than thirty years later, the unfortunate editors of BusinessWeek have the distinction of printing what was quite possibly the greatest contrarian indicator in history.

There is a difference, however.  Mr. Hibbert is not saying that equities are dead.  He is saying that the cult surrounding them is dead, describing the sentiment of investors who no longer believe that stocks are “guaranteed” to make them wealthy.

was written by a prominent group of ex-communists who chose the provocative title to describe their own prior cult-like faith in Marxism.  In 2001, Hans-Herman Hoppe wrote a similarly titled book in 2001, Democracy: The God that Failed, in which he described the belief in universal democracy as being based on religious-like faith.  Neither ideology proved to be the panacea that its adherents believed as the bloodshed of the 20th century proved.

For many investors, particularly those in or nearing retirement, their faith in stocks has likely been permanently jaded.  Add equities to the list of gods that have failed.  The colossal 2007-2009 bear markets wiped out more than a decade’s worth of gains for investors who faithfully bought and held throughout the 1990s and 2000s.  Retirement dreams for many have been ruined.  Disgusted with the entire business, many have taken money out of the equity markets altogether and have opted for the “safety” of bonds.

During asset bubbles, investors engage in cult-like behavior en masse.   They cease to view their investments dispassionately, and when evidence or common sense would suggests that their faith is misplaced they get defensive.  (Read the comment section under my previous article on gold, and you will understand what I’m saying.)  But when faith begins to crack, sentiment tends to go too far the other way.  Investors oscillate between having too much faith and not enough. For those who are able to keep a level head, all of this is good news.

As I wrote in a prior article, many staid American blue chips are now priced to deliver respectable if not spectacular returns.  Dividend yields on many are well in excess of bond yields.

Returning to Mr. Hibbert, he would appear to share this view: “Given that the starting valuation for equities is now very low, then if those companies can continue to increase their earnings profile I think you will see very strong returns because you will get both capital growth and dividend yield.”

The death of the Cult of Equities is a once-in-a-generation blessing for those investors with the patience and temperament to wait for sentiment to improve.  With dividend yields as high as they are currently, they are being paid handsomely for their patience.

The Cult of Equities is dead.  Long live equities.