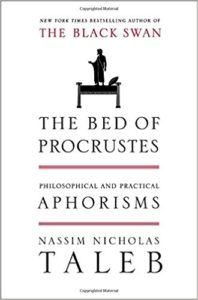 Nassim Nicholas Taleb, the best-selling author of Fooled By Randomness and The Black Swan, is at it again. Late in 2010, Taleb quietly published his third book, The Bed of Procrustes: Philosophical and Practical Aphorisms.

Taleb chose the title carefully. Procrustes was a character from Greek mythology with an odd sense of hospitality. He would abduct travellers passing by his home, dine with them, and then invite them to spend the night in his guest bed. But being a bit of a perfectionist, he wanted them to fit in the bed just right. So those that were too tall for the bed had their legs chopped off; those that were too short were stretched.

In Taleb’s mind, much of the modern world—and modern finance in particular—is a Procrustean bed of sorts. Rather than adjust our models and theories to fit a complex reality, we try to force the real world to fit our models. And when they don’t, rather than accept that the model was faulty, we blame external forces that couldn’t be seen. “It’s not that my model was wrong; it’s just that a black swan came out of nowhere!”

My use of the metaphor of the Procrustes bed isn’t just about putting something in the wrong box; it’s mostly that inverse operation of changing the wrong variable, here the person rather than the bed…

Since the Enlightenment, in the great tension between rationalism (how we would like things to be so they make sense to us) and empiricism (how things are), we have been blaming the world for not fitting the beds of “rational” models, have tried to change humans to fit technology, fudged our ethics to fit our needs for employment, asked economic life to fit the theories of economists, and asked human life to squeeze into some narrative.

As we’ve come to expect from Taleb, The Bed of Procrustes is full of wit, wisdom, and more than a little sarcasm. But unlike Taleb’s prior works, Bed is not a manifesto for the appreciation of randomness in life, nor is it a critique of the arrogance (and ignorance) of contemporary Wall Street. The Bed of Procrustes is a collection of pithy sayings that has more in common with an Oscar Wilde story or even an irreverent parody of Confucius quotes than with a money and investing book.

Taleb comes across as a bit of an anarcho-libertarian at times. In addition to financial models, he finds many of the facets of normal life to be Procrustean beds: regulations, employment, top-down governments, academia, gyms, commutes, high-rise office buildings, and even marriage and relationships.

Still, The Bed of Procrustes manages to be both thought provoking and wildly entertaining at the same time. Here are some of my favorite aphorisms from the book: