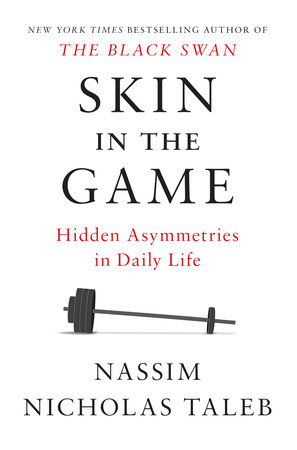 It’s morally wrong to enjoy the benefits of something while leaving others to accept all the risks.

This is the central theme of Nassim Nicholas Taleb’s latest work, Skin in the Game: Hidden Asymmetries in Daily Life, a book that should be required reading for anyone in public office or in any position of authority or influence. And by “position of authority or influence,” I’m not speaking only of politicians or journalists. I would include everyone from the town doctor to the b-list celebrity with a large Twitter following.

The concept of skin in the game can be best understood by what Taleb calls the “Silver Rule,” or the flip side of the Golden Rule to do unto others as you would have them do unto you: Don’t do onto others what you wouldn’t want them to do to you. Don’t expose others to harm unless you are also directly or indirectly exposed.

As an example of what that looks like in the real world, consider ObamaCare. Our leaders passed legislation that caused a massive spike in the cost of health insurance — doing real harm to tens of millions of Americans — while accepting none of the risk. Congressmen don’t buy their health insurance on an ObamaCare exchange and are given — at taxpayer expense — vastly superior health plans. [Note: this is my observation; I don’t know Taleb’s views on ObamaCare.]

Or, as Taleb has pointed out in the past, consider the Iraq War and the various Western interventionisms in the Arab world. Our leaders might have been less interested in regime change if, like the kings of ancient times, they had to lead the army from the front.

Skin is less structured and less technical than Taleb’s previous books and will be far easier to digest for a non-financial reader. It feels less like a book and more like a long, animated chat with Mr. Taleb in a cafe over several strong cups of coffee.

I  thoroughly enjoyed Skin in the Game and that I strongly recommend it. But if you are new to Taleb’s work, you shouldn’t start with this book. It will make more sense and you’ll get more out of it if you’re already familiar with Taleb’s core ideas: the role of randomness in life, naive empiricism, black swans (low-probability but high-impact events), fragility vs. antifragility, etc.)

I recommend you start by reading his first book, Fooled by Randomness, particularly if you have a background in finance or trading. I first read it in 2002, and there are precious few books that have had more of an influence on me.

But if you are familiar with Taleb and generally like his work, you’ll find Skin in the Game to be a worthwhile addition to your library. It has that peculiar cocktail of  logical reasoning, historical perspective, statistical rigor and good old-fashioned street smarts that Taleb is known to mix.

Before I sign off, I’d like to end with a quote of Taleb’s that made me smile… because it is something that I myself have done. If you’re going to start a business, you should put your name on the door. As Taleb puts it, “products or companies that bear the owner’s name convey very valuable messages. They are shouting they have something to lose. Eponymy indicates both a commitment to the company and a confidence in the product.”

Kudos to Mr. Taleb on another solid work, and I look forward to the next one.

The Bed of Procrustes