The Economist ran a piece over the weekend prodding German Chancellor Angela Merkel to “Build Some Bridges and Roads” as a way of jolting Germany’s slowing economy back into growth.

My response:  Who’s going to be driving on them in another 10 years?

Take a look at the following chart, which comes from the United Nation’s Population Division.  All estimates are using demographic data as of 2012. 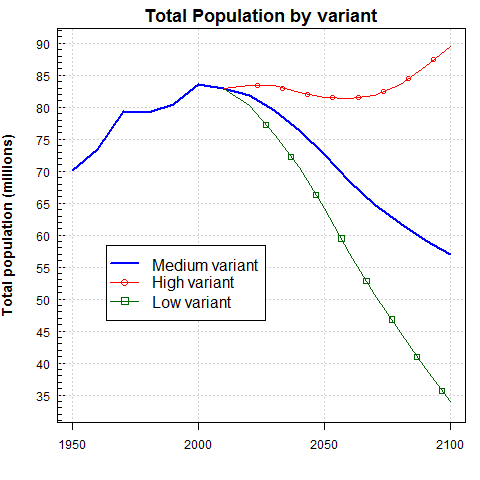 Germany is in the midst of a multi-decade baby bust.  Its population peaked in the mid 2000s and has been in decline ever since.  The average estimates (i.e. “medium variant”) shows Germany losing nearly 10 million people by 2050, or roughly 12% of the population.  Another 10.4 million Germans–or nearly 14% of the then-living population–will be aged 80 or over.  So roughly a quarter of Germany’s current population will be either dead or too old to do a lot of driving in another 35 years.

So I repeat the question: Who’s going to be driving on all of the roads and bridges The Economist is prodding Germany to build?

Germany has consistently resisted looser monetary policy by the European Central Bank and calls from the rest of Europe for Germany to spend more as a way of keeping the Eurozone economy afloat.  On the first count, I’d say Germany is dead wrong.  The German obsession with inflation looks more ridiculous every day as the Eurozone inches closer and closer to outright deflation.  But on the resistance to run government budget deficit, the Germans are taking the only course of action that makes sense.  Running up debts today to build infrastructure that no one will be around to use makes no sense, particularly when you figure that there will also be no one around to pay it back.