The jobs report came in better than expected today, leading the usual barrage of speculation that the Fed will be tightening sooner rather than later.

Guess what?  Not gonna happen.

I try to avoid Fed bashing.  There is really nothing worse than a Monday-morning quarterback, and in any event, complaining about the Fed’s policies is counterproductive.   It’s a distracting waste of time.

That doesn’t mean that I support Yellen & Company, mind you. I just try to keep my emotions out of the mix when handicapping the Fed’s next move.

The general consensus seems to be that the Fed will aggressively start to raise rates starting late in the first quarter of next year, and the Fed itself seems to be forecasting an aggressive timeline for hikes. By the end of 2017, the Fed’s policy-setting committee expects the fed funds rate to be 3.75%.

That seems awfully aggressive to me.  Assuming quarter-point rate hikes, the Fed would have to raise rates at 15 consecutive meetings.  If they start in March of 2015, they could theoretically hit that number by the first quarter of 2017.  But the bond market seems to be telling a different story if you look at the spread between traditional Treasury yields and inflation-protected Treasury (or TIPS) yields. The market is pricing in annual inflation of just 1.9% over the next ten years.

I don’t see the ten-year Treasury yielding more than 3.75% by 2017, particularly with rates as low as they are across Europe and Japan.  That means that the Fed would be inverting the yield curve (raising short-term rates above long-term rates), which is generally a leading indicator of a recession.

We probably will have a recession sometime in the next two years (see October Portfolio Outlook) as part of the normal ebb and flow of the economy.  But I don’t think the Fed is reckless enough to force one unless inflation gets out of control…and again, the bond market is telling us that that isn’t happening any time soon.

But here’s the real trump card and a major reason why I believe the Fed will remain dovish for a lot longer than most Fed watchers expect: The hawks are retiring. 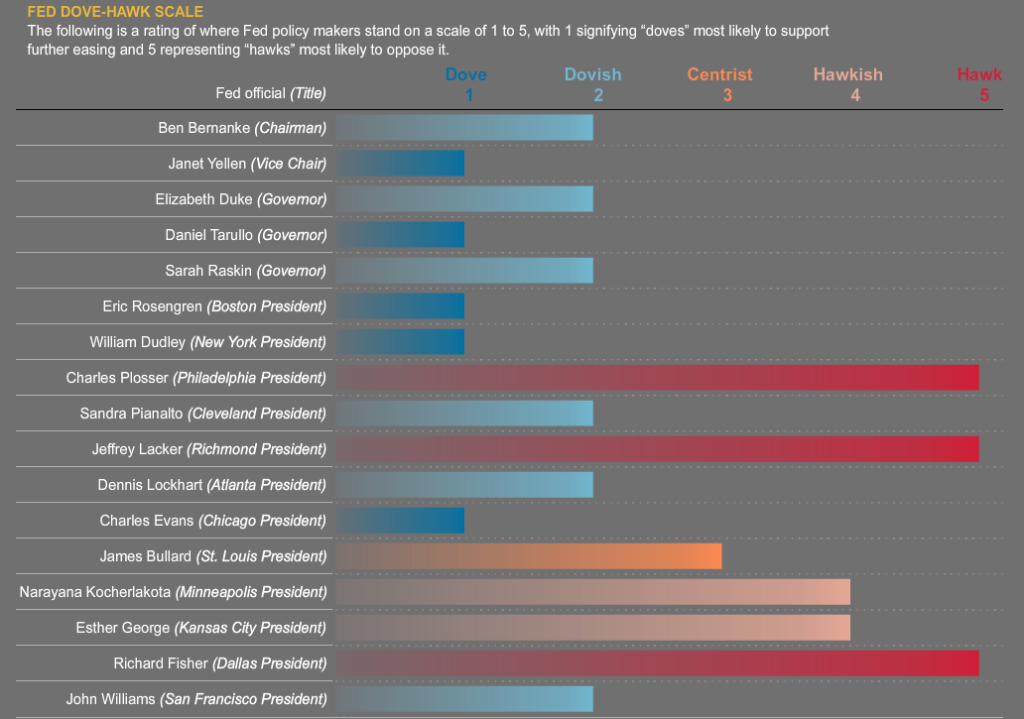 Dallas Fed President Richard Fisher and Philadelphia Fed President Charles Plosser—two of the three most hawkish governors—will be stepping down in 2015 and will most likely be replaced by more dovish appointees by President Obama.  That will leave Jeffrey Lacker as the last of the reliable hawks.

Bottom line: The Fed will not be tilting in a more hawkish direction any time soon.