Here’s a little something to think about following Mother’s Day. I trot this chart out every few months to drive home an important point: Over the long term, China is destined to undergo a Japan-style demographic malaise.  It is unavoidable, and there is no policies the Chinese government can implement at this point to stop it.

I should be clear; in the immediate term, I am a major China bull and I am long China via the iShares MSCI China Large Cap ETF (FXI) and the DB X-Trackers Harvest China ETF (ASHR).  But China’s future looks bleak.  I would go so far as to say China has no future.   Take a look a the chart. China’s population of women of prime childbearing age (25-29) goes into steep decline starting next year. 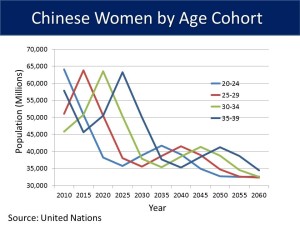 Children are the future.  You need them to pay the taxes and man the factories of tomorrow. More critically, in the age of modern consumer capitalism, you need them swiping the credit cards and buying the homes of tomorrow.  This is particularly relevant for China given its government’s stated goal of reorienting its economy away from exports and towards domestic consumption.

Of course, children require mothers to bring them into the world.  And they are about to be in short supply.

Average age of marriage and first childbirth are rising worldwide, and as a general rule the more developed a country becomes (and the more educated its women become) the higher the age of marriage and motherhood.  So, let’s assume that China’s women are postponing motherhood under their early 30s.  Even then, China has a major problem.  Its population of women aged  30-34 goes into steep decline starting in 2020.

Conception is still possible into the late 30s and 40s, of course.  But it gets more difficult and, realistically, it limits family size.

What does all of this mean?

China is facing a demographic death spiral.  China is a buy today.  But in another decade, it will likely be the short opportunity of a lifetime as China sinks into a deflationary abyss.

Charles Lewis Sizemore, CFA, is the editor of Macro Trend Investor and chief investment officer of the investment firm Sizemore Capital Management. Join Macro Trend Investor today and start profiting from the powerful megatrends that are cresting across the global economy—and get ahead of the next macro trend to build your wealth for years to come.  Just $1.00 grants you your all-access pass!