Carl Icahn is at it again.  After successfully lobbying (some might say “bullying”) Apple (AAPL) into aggressively repurchasing its undervalued stock, Carl Icahn penned another open letter to Apple CEO Tim Cook advocating more of the same, to “accelerate and increase the magnitude of share repurchase.”  By Icahn’s calculations, Apple is worth at least $203 per share, roughly double today’s price.

Icahn owns 53 million shares of Apple stock, making him one of Apple’s largest shareholders.  A cynic could say that Icahn is merely talking his book when he writes that “At today’s price, Apple is one of the best investments we have ever seen from a risk reward perspective, and the size of our position is a testament to this.”

As is usually the case, the devil is in the details.  Icahn’s estimate of $203 per share came from taking his estimate of 2015 earnings and multiplying it by a forward  P/E multiple of 19.  A forward P/E of 19 is a little on the aggressive side, though not necessarily crazy if you believe that Apple’s outsized returns on equity are sustainable.  In the post iPhone era, Apple’s ROE has consistently been above 20% and for most of that period has been above 30%. 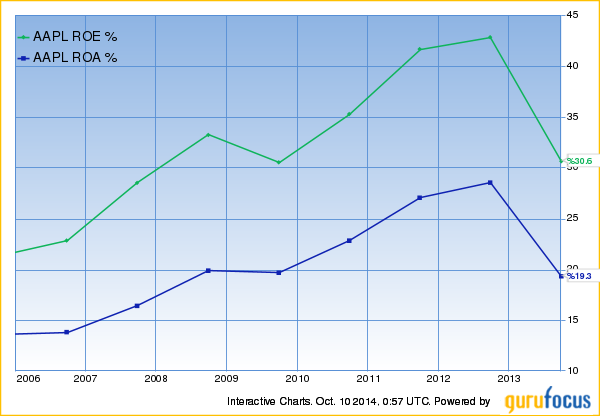 I’m modestly confident in Icahn’s earnings estimates, at least for the next year.  Icahn sees revenues and EPS jumping  next year by 25% and 44%, respectively.  But looking further out, the picture gets a lot murkier.

Let’s dig a little deeper.   The iPhone is Apple’s most important product by a wide margin, accounting for 55% of net sales.  The iPhone 6 has thus far been a hit with consumers, and its larger screen should go a long way to stemming market-share losses to large-screen Android devices.  Icahn sees volume growth of 22% next year and 7% and 10%, respectively, in 2016 and 2017.  That might be doable.  But it depends on consumers continuing to aggressively upgrade their phones, as the high-end smartphone market in the developed world is already saturated.  Icahn is also assuming that Apple “experiences no pricing pressure.”  I’m not so sure that’s realistic given that Samsung is unlikely to sit idly while Apple steals market shares.

Icahn sees the IBM (IBM) partnership leading to 13% annual revenue growth in the iPad. Again, this might be possible.  But tablet sales industrywide have massively decelerated over the past year, and the larger-screen “phablet” iPhone is a direct competitor to the iPad.  Icahn’s estimates here seem a little aggressive but within the realm of possibility, I suppose.

I might be willing to give Icahn the benefit of the doubt on iPhone and iPad sales.  But some of his other projections are a bridge too far.   I have very little faith in the Apple Watch, for example, and I don’t see Icahn’s estimate of 72.5 million units in 2017 as being realistic.  To start, your potential market is limited to people who already own an iPhone.  Let’s say that Apple is able to sell something in the ballpark of 200 million iPhones per year over the next several years.  Is it realistic to assume that roughly one in three iPhone buyers will also buy an Apple Watch?  I’m thinking no.

But it’s his call on Apple Pay that strikes me as being ludicrous.  Icahn sees Apple pulling in a market share of 30% of all debit and credit card purchases by 2017.  Digital wallet adoption has been slow so far, and while that might change, it’s not going to happen on anything close to Icahn’s timeline.  I would be surprised to see Apple Pay accounting for 3% of all credit and debit card sales, let alone 30%.

Looking at back of the envelope estimates, one in four American adults currently owns an iPhone.  Let’s round up and say 30%. Icahn seems to think that all of them will be exclusively using their iPhones in lieu of traditional plastic by 2017.   That’s not realistic, to say the least.

I doesn’t matter.  Icahn’s estimates are likely pretty far off the mark, but I still agree with him completely that Apple is undervalued.  Apple should, at a minimum, trade at a modest premium to the S&P 500 rather than the discount we see today.  And starting at today’s prices, 20%-30% upside over the next year is possible if not likely.

And I would agree with Icahn completely that Apple stock represents one of the best risk/return tradeoffs I’ve ever seen.