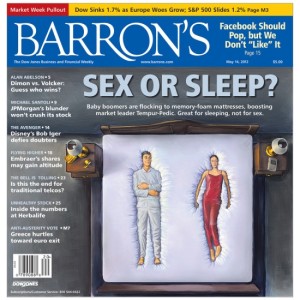 I was a little surprised to see the venerable Wall Street weekly ask its readers such a personal question, but this was the title of the May 14 cover story.

The question is not directed at how Barron’s readers choose to spend their evenings  but rather on what type of mattress they choose to buy. Most people sleep on traditional spring mattresses, but sales of memory-foam mattresses have skyrocketed in recent years.  Despite their high price, they now make up almost 20% of the $4.6 billion U.S. mattress market.

Fans of memory foam cite the material’s ability to contour to the body and say that memory foam mattresses work wonders on sore backs and joints.

The mattresses are not without their critics, however.  And at the top of the list is the difficulty of…ahem…”recreational activities” caused by the lack of resistance.

Tempur-Pedic is the largest seller of memory foam mattresses, and its traditional-spring rivals have targeted the perceived shortcomings in their advertising.  Consider this somewhat racy ad by Sealy, which has made the rounds on YouTube.

Baby Boomers are the largest buyers of memory foam mattresses, which might seem somewhat improbable given that this is the generation that launched the sexual revolution of the 1960s and 70s. It would seem that at this stage of their lives getting a good night’s sleep now trumps all other priorities for America’s Boomers (either that, or they two keep two beds in their homes; one for sleeping and one for…nevermind).

On top of the stress and exhaustion of modern life, Baby Boomers have “the additional problem of creaky bones,” according to Barron’s, which explains why Boomers have embraced the product.

But what Barron’s underestimates is the price of memory foam mattresses and how the product fits a familiar profile for the generation.  Memory foam beds are simply too pricey for most consumers under the age of 50. A queen-sized Tempur-Pedic mattress retails for $3,000 to $7,500, which is outside of the price range that most younger couples can afford.

Furthermore, the Baby Boomers have redefined what we think of as “luxury.”  This is a generation that rebelled against traditional luxury consumption (think fancy suits, watches, jewelry, etc.) yet thinks nothing of spending a small fortune on high-end running shoes, camping gear, or kitchen utensils.  This is the generation that gave us the luxury SUV and even the luxury kitchen.

Memory-foam mattresses are a modern-day luxury good; a product designed for the “mass affluent” with a practical purpose in mind.  If this is a subject that interests you, I recommend you pick up a book that was way ahead of its time in describing the buying habits I describe in this article: David Brooks’ Bobos in Paradise, published in 2000.

“Bobo” is short for   Bourgeois Bohemian, which is how Brooks describes the upper-middle-class Boomer ethos: a mixture of liberal idealism of the 1960s and the self-interested ambition of the 1980s.

Returning to memory-foam mattresses, a very important question remains: If America’s Boomers have already peaked in their consumer spending, then what are the prospects for the industry?

In the immediate term, demand will likely remain relatively high.  Overall consumer spending may peak in the late 40s or early 50s, but demand for many products remains strong far later in life.  As a generation, the Baby Boomers are still in their peak earnings years, and many have the incomes to support these kinds of purchases.

Still, it is difficult to imagine many elderly pensioners in their 70s or 80s forking over $5,000 for a high-end mattress.  The sweet spot for high-end mattress sales would have to be between the ages of 40-60, when a consumer still has the income to support such a purchase.

Bottom line?  Tempur-Pedic had better make good use of the next decade.  Because demographic trends do not suggest that demand will remain high for their products forever.