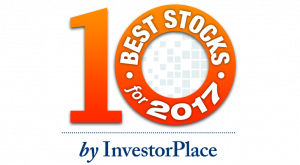 It’s that time of year again… While the Best Stocks for 2016 contest is still going down to the wire — and yours truly is duking it out for first place, up 38% on the year — it’s already time to start planning for 2017. Here’s an excerpt from my 2017 submission:

As I’m writing this, we still have a few weeks left in 2016, and I’m duking it out for first place in the Best Stocks for 2016 contest with Jason Moser. His pick — mortgage processor Ellie Mae Inc (ELLI) — has a slight edge on mine — pipeline operator Energy Transfer Equity LP (ETE). But it’s a close race, and anything can happen. So may the best stock win!

Nerve-wracking, “blood-in-the-streets” markets like those are the kinds of markets I live for. I lost clients in December and January, but frankly, I didn’t mind. Those who stuck with me ended up enjoying a fantastic year in 2016 when the market turned up again.As we start 2017, we’re in a very different type of market. This time last year, stocks were in freefall, and energy stocks in particular were in full-blown panic mode.

Well, a year later, things are vastly different. We’re entering the year with investors feeling downright euphoric … and that makes me nervous. I’m sitting on cash positions of 15%-20% in most of my stock portfolios.

But there is one pocket of the market that I still consider massively and unambiguously cheap — automakers. So even if this stock rally fizzles in 2017, I think it’s likely that the automakers finish the year with a respectable return.

And as always, may the best stock win!