Leave it to the stock market to do the exact opposite of what you expect it to do. Following Donald Trump’s surprise win, stocks have spent the past three weeks pushing higher.

Ironically, given that the President-Elect is a world-renown real estate developer, real estate investment trusts (REITS) have gotten clobbered. REITs as a sector peaked in July, but the selling has continued well past the presidential election.

As I’m writing this, the sector is down nearly 20%… ouch!

Whenever I see a sector flirting with bear-market territory at a time when the rest of the market is hitting new all-time highs, I sit up and take notice. Sometimes it can be the sign of a sector facing deep, long-term problems with no easy solutions. But just as often, it’s a classic market overreaction.

So, as we look at the carnage in REITland, which is it?

Is the market correctly forecasting real estate doom… or is Mr. Market working himself into a stomach ulcer over nothing?

The narrative right now is that the Fed’s pending rate hike is bad news for REITs, as it potentially raises their cost of capital. Adding to this anxiety is the spike in longer-term bond yields. See, higher bond yields hurt REITs in two ways.

To start, it raises their borrowing costs. REITs, as with most real estate investors, tend to borrow a lot of money, and every additional dollar paid in interest is a dollar not kept as profit. But perhaps worse, REITs tend to be priced relative to bonds. So rising bond yields (and falling bond prices) mean rising REIT yields (and falling REIT prices).

This latter point has been a particular worry since investors have come to view REITs as bond substitutes over the past few years. With bond yields too low to be worth considering, investors have been chasing the higher yields of other income sectors, particularly REITs.

Again, that’s the narrative. But is it actually true?

Well, let’s see. The following chart shows the performance of REIT stocks during periods of rising bond yields. The shaded areas represent periods in which 10-year bond yields were rising. 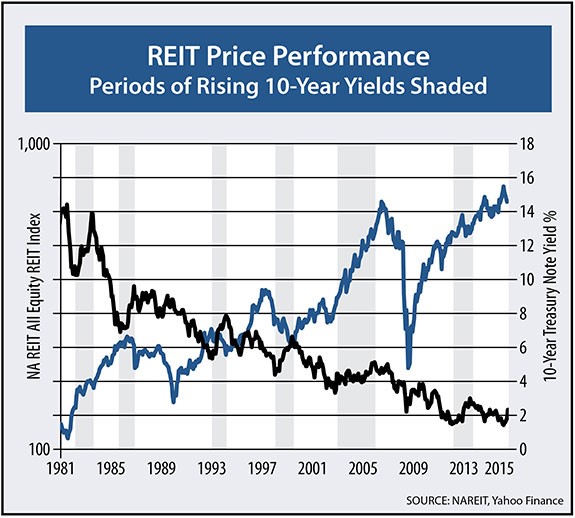 If the narrative you read in the financial press were true, you’d expect REIT stocks to tank every time bond yields had a significant bounce. But that is clearly not the case here. Of the six times since 1981 that we saw bond yields rise by a meaningful amount, REIT prices actually rose in three of them.

With President-Elect Trump pushing for large tax cuts and major new infrastructure spending, there’s a lot of worry in the market right now that outsized budget deficits will cause long-dead inflation to come back with a vengeance.

And while I would love to get a tax cut, I don’t see it giving a major jolt to consumer spending. The cohorts most likely to have incomes high enough to benefit – baby boomers and early gen-xers – have already crossed their peak spending years, so any extra cash due to tax cuts is likely to get saved or invested rather than spent.

The generation most likely to actually spend the money – millennials – is already paying close to zero in taxes at its current income levels, so it’s hard to see Trump’s tax plan having a major impact.

So, what’s next for REITs?

I’m betting that we see another repeat of the scenario we had a year ago. Then, as now, bond yields ended the year relatively high, and REITs were under pressure. But when yields started to ease, REITs enjoyed a spectacular rally.