Cliff Asness doesn’t have the name recognition of a Warren Buffett or a Carl Icahn. But among “quant” investors, his words carry a lot more weight.

Asness is the billionaire co-founder of AQR Capital Management and a pioneer in liquid alternatives. For all of us looking to build that proverbial better mouse trap, Asness is our guru. My own Peak Profits strategy, which combines value and momentum investing, was inspired by some of Asness’ early work.

Unfortunately, he’s been getting his butt kicked lately. His hedge funds have had a rough 2018, which prompted him to write a really insightful and introspective client letter earlier this month titled “Liquid Alt Ragnarok.”

“This is one of those notes,” Asness starts with his characteristic bluntness. “You know, from an investment manager who has recently been doing crappy.”

Rather make excuses for a lousy quarter (Asness is above that), he uses his bad streak to get back to the basics of why he invests the way he does.

As I mentioned, Asness specializes in liquid alternatives. In plain English, he builds portfolios that aren’t tightly correlated to the S&P 500. They’re designed to generate respectable returns whether the market goes up, down or sideways.

You don’t have to be bearish on stocks to see the value of alts. As Asness explains,

You do not want a liquid alt because you’re bearish on stocks or, more generally, traditional assets. That kind of timing is difficult to do well. Plus, if you’re convinced traditional assets are going to plummet, you want to be short, not “alternative.” In other words, liquid alts are a “diversifier” not a “hedge.”

I love this, so you’re going to have to forgive me if I “geek out” a little bit here. My professors pretty well beat this stuff into my head when I was working on my master’s degree at the London School of Economics. 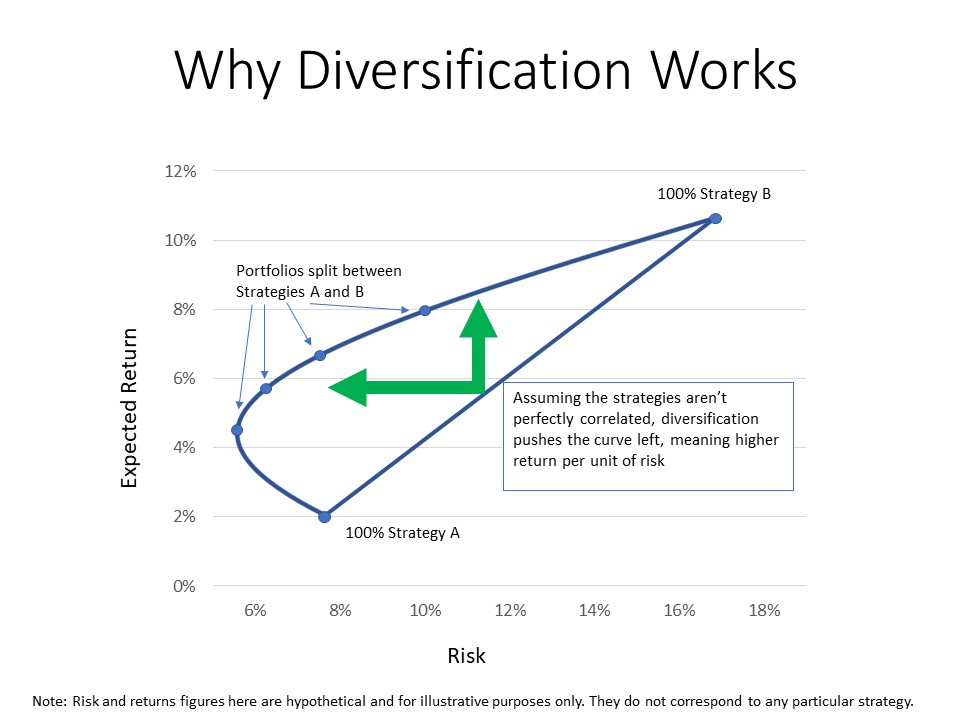 Take a look at the graph. This is a hypothetical scenario, so don’t get fixated on the precise numbers. But know that it really does work like this in the real world.

In a world where Strategies A and B are perfectly correlated (they move up and down together), any combination of the two strategies would be a simple average. If A returned 2% with 8% volatility and B returned 11% with 16% volatility, a portfolio invested 50/50 between the two would have returns of 6.5% with 12% volatility. That is what you see with the straight line connecting A and B. Any combination of the two portfolios would fall along that line (assuming perfect correlation).

But if they are not perfectly correlated (they move at least somewhat independently), you get a curve. And the less correlation, the further the curve gets pushed out.

This is why you diversify among strategies. Running multiple good strategies at the same time lowers your overall risk and boosts your returns. The key is finding good strategies that are independent. Running the basic strategy five slightly different ways isn’t real diversification, and neither is owning five different index funds in your 401k plan. Diversification is useless if all of your assets end up rising and falling together.