Perhaps I’m just getting nostalgic with age, but there is something magical about Pamplona’s annual festival.  Cities and towns scattered across the Spanish-speaking world have their own running of the bulls, but there is only one San Fermin.

My neighbors probably hate me, but I take down my American stars and stripes a few days after July 4 and, from July 7 – 14, fly either the Basque  ikurriña or the Spanish Osborne bull flag you often see at Spanish soccer games. 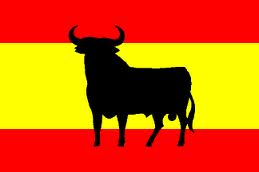 It’s a reminder to me that it’s healthy at times to be a little bit reckless.  I will never run with the bulls again; I’m about ten years too old for that now, and couldn’t stand the thought of my wife having to explain to my two sons that their imbecilic father was gored or trampled to death in a sad attempt to recapture his youth.  (Incidentally, the fiesta just reported its first goring this morning.)

But I’ll never forget how it felt, in July of 2004, and how my legs wobbled afterwards from the surge of adrenaline.

Best wishes to all the fermines this week, and let me pass on one piece of advice:

The path that the bulls take makes a sort of “Z” shape. You absolutely DO NOT want to run near the two bends in the Z.  Bulls, like battleships, cannot turn on a dime, and the animals tend to slip and fall down at those turns.  That is when they get dangerous.  When the bulls are running as a herd, there are not particularly dangerous unless you happen to fall down in front of them.  But when a bull gets separated from the herd, he gets disoriented…and angry.  So, when the bulls slip at the bends in the Z, that is when they lash out and gore anything in site.

The best place to run is in the final straightaway, as by that point the bulls have reformed their herd and the street is a little wider, given you more places to jump and hide if need be.