A more comprehensive version of this article covering all presidents back to 1889 was originally published on Kiplinger’s. 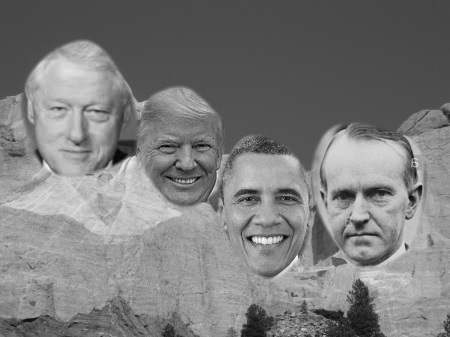 But if you were to make a Mount Rushmore for presidents based on stock market performance, none of these men would make the cut. There really was no stock market to speak of during the administrations of Washington, Jefferson and Lincoln, and Teddy Roosevelt ranks as one of the worst-performing presidents of the past 130 years. In his nearly eight years in office, the Dow returned a measly 2.2% per year.

Just for grins, let’s see what a “stock market Mount Rushmore” might look like. And while we’re at it, we’ll rank every president that we can realistically include based on the available data.

Naturally, a few caveats are necessary here. The returns data you see here are price only (not including dividends), so this tends to favor more recent presidents. Over the past half century, dividends have become a smaller portion of total returns due to their unfavorable tax treatment.

That said, the data should give us a “quick and dirty” estimate of what stock market returns were like in every presidential administration since Benjamin Harrison. (He ranks near the bottom, by the way, with losses of 1.4% per year).

At the very top of the list is Calvin Coolidge, the man who presided over the boom years of the Roaring Twenties. Coolidge, a hero among small-government conservatives for his modest, hands-off approach to government, famously said “After all, the chief business of the American people is business. They are profoundly concerned with producing, buying, selling, investing and prospering in the world.”

It was true then, and it’s just as true today.

In Coolidge’s five and a half years in office, the Dow soared an incredible 266%, translating to compound annualized gains of 26.1% per year.

Of course, the cynic might point out that Coolidge was also extraordinarily lucky to have taken office just as the 1920s were starting to roar… and to have retired just as the whole thing was starting to fall apart. His successor Hoover was left to deal with the consequences of the 1929 crash and the Great Depression that followed.

The second head on Rushmore would be that of Bill Clinton. Clinton, like Coolidge, presided over one of the largest booms in American history, the 1990s “dot com” boom. And Clinton, particularly during the final six years of his presidency, was considered one of the more business-friendly presidents by modern standards.

Not far behind Clinton is Barack Obama, who can boast cumulative returns of 181.1% and annualized returns of 13.8%. President Obama had the good fortune of taking office right as the worst bear market since the Great Depression was nearing its end. That’s fantastic timing. All the same, 181% cumulative returns aren’t too shabby.

Interestingly, the infamous “Trump rally” places Donald Trump as the fourth head on Mount Rushmore with annualized returns thus far of 12.8% It’s still early, of course, as President Trump is not even two years into his presidency. And given the already lofty valuations in place when he took office, it’s questionable whether the market can continue to generate these kinds of returns throughout his presidency. But he’s certainly off to a strong start.

After Trump, the next four presidents – William McKinley, George H.W Bush, Dwight Eisenhower and Gerald Ford – are clumped into a tight band, each enjoying market returns of between 10.8% and 11.3%. And the top 10 is rounded out by Ronald Reagan and Harry Truman, with annualized returns of 10.2% and 8.1%, respectively.

We’ve covered the winners. Now let’s look at the losers; the “Mount Rushmore of Stock Market Shame,” if you will.

Herbert Hoover occupies the bottom rung with a truly abysmal 77.1% cumulative loss and 30.8% annualized compound loss. In case you need a history refresher, Hoover took office just months before the 1929 crash that ushered in the worst bear market in U.S. history.

Don’t feel too sorry for Hoover, however. 1,028 economists signed a letter warning him not to sign the Smoot Hawley Tariffs into law… yet he did it anyway. This helped to turn what might have been a garden variety recession into the Great Depression. That’s on you, Hoover.

In second place is George W. Bush, with annualized losses of 5.6%. Poor W had the misfortune of taking office just as the dot com boom of the 1990s went bust and shortly before the September 11, 2001 terror attacks helped to push the economy deeper into recession. And if that weren’t bad enough, the 2008 mortgage and banking crisis happened at the tail end of his presidency.

Sandwiched between two of the worst bear markets in U.S. history, poor W never had a chance.

Rounding out the Mount Rushmore of Stock Market Shame are Grover Cleveland and Richard Nixon with annualized losses of 4.9% and 3.9%, respectively.

Nixon’s presidency was marred by scandal and by the devaluation of the dollar, neither of which was good for market returns.

Poor Cleveland, on the other hand, was just unlucky. By any historical account, he was a responsible president who ran an honest and fiscally sound administration. But then the Panic of 1893 hit the banking system and led to a deep depression. The fallout was so bad that it actually led to a grassroots revolt and to a total realignment of the Democratic Party. After Cleveland fell from grace, the mantle of leadership shifted to Progressives Woodrow Wilson and William Jennings Bryan, and the rest is history.

To see the full rankings of all presidents since 1889, see The Best and Worst Presidents (According to the Stock Market)