I originally penned this article for the August 2007 issue of the HS Dent Forecast–nearly three years ago.  My comments on deflation and consumer spending turned out to be right on the mark.

The late Milton Friedman may be the most accomplished economist of his generation. Just as his predecessor John Maynard Keynes influenced every aspect of economic thinking and policy in the 1930s, 40s, and 50s, virtually every significant development in recent decades towards free and open markets bears Friedman’s mark. Friedman’s Chicago School provided much of the intellectual fuel for the Reagan and Thatcher Revolutions in America and Britain. Even Augusto Pinochet, the Chilean military dictator, staffed his government with “Chicago Boys” who eventually gave Chile one of the most competitive economies in the developing world. Milton Friedman was a revolutionary who truly changed the world, though this piece is not about his intellectual exploits. Rather, it explains the economist’s theories on consumer behavior and relates them to our own research. We will attempt to add demographic insights into the venerable Milton Friedman’s work and discuss the implications for the next economic season.

But First, a Word on Keynes…

Any discussion of consumption must first start with a review of John Maynard Keynes and his work. Pre-Keynes, most economic theory was focused on production, or the supply side of the equation. Consumption, driven by end-user demand, was merely an afterthought, something that just “happened” and didn’t need to be explained. This was best summarized by Say’s Law, a maxim memorized by every freshman economics student: “Supply creates its own demand.” By virtue of manufacturing something, you have created a demand for that something, since it can be traded for other goods. This could be called a “build it and they will come” strategy, to borrow a line from the movie Field of Dreams.

But what happens when supply doesn’t create its own demand. What happens – as in the Great Depression and in 1990s Japan – there is not sufficient demand to absorb a plentiful supply?

During the Great Depression in the US and UK, consumers stopped consuming, virtually snapping their wallets shut for more than a decade. This lead Keynes to his study of consumer behavior, which is best summarized by his Consumption Function (also required memorization by freshmen econ students), seen below in Figure 1. 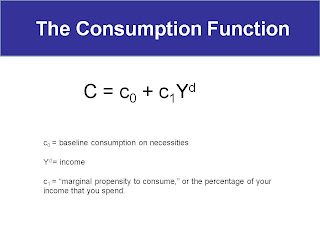 In a nutshell, Keynes’s formula says that people spend a constant percentage of their current incomes, once basic necessities are taken care of. So, Joe Sixpack cashes his paycheck every two weeks and spends, say, 75% of that paycheck each and every pay period of his life. When he gets a raise and his check rises, he spends 75% of the now higher amount. When times are hard and he takes a pay cut, he instantly cuts his spending down to 75% of the new, smaller, amount. Joe’s spending is completely flexible and based solely on his current income.

Of course, any non-economist would know this to be patently false, both for individuals and for entire societies. To start, most consumption in the modern economy is not really “discretionary.” Most significant expenditures – everything from the home mortgage to piano lessons for your daughter – are paid on some kind of monthly payment plan. Even though piano lessons can be stopped at any time, they generally aren’t. Likewise, your cable TV plan does not get upgraded to the deluxe, high-definition package one month and then get cut to basic cable or – gasp! – rabbit ears the next. Your cable bill is stable and changes only slightly over time.

Most expenses are very slow to change when income changes. One of the major benefits of the modern credit-driven economy is that it can provide for lifestyle stability. If money is a little tight this month, your family’s lifestyle does not have to radically change, at least not immediately. This is the primary reason that consumer spending is so resilient despite economic calamity and why economists have been consistently wrong in their forecasting of recessions. We’ll return to this theme shortly.

Keynes also fails to note that spending and saving habits are affected by level of wealth and – most importantly to our research – age and stage of life. We’ll give credit to Keynes for being the first person to approach consumption scientifically, but it is obvious that his model was incomplete and not reflective of the real world.

Many of these deficiencies were addressed by the economists Modigliani, Brumberg, and Ando in the 1950s and 60s in what became known as the Life Cycle Hypothesis (Figure 2). These economists graphically displayed what every household intuitively knows. People follow a life cycle of earning and spending. In early career, our incomes are low relative to our expenses, often forcing us to take out large debts for homes, cars, appliances, etc. In middle age, we earn enough money to meet all of our current expenses, plus save for retirement. And naturally, in retirement our income falls and we slowly spend down our savings. 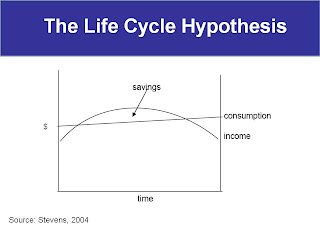 This model, though more advanced than Keynes’s, is still problematic. Notice that income makes a curve while consumption makes a straight line. This chart is suggesting that our consumer spending increases in a mild, linear fashion from birth until death. Of course, the foundation of HS Dent demographic research is that this is absolutely false. Spending follows a curve much like that of income, though on a different timeline. Consider Figure 3, what we will call the “HS Dent Modified Life Cycle.”

In this case, the income line has the same basic shape as in Figure 2, though the consumption line has been transformed into a curve. 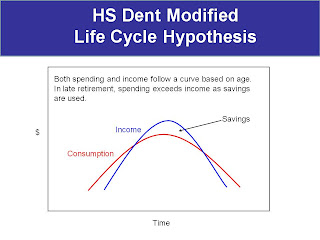 This familiar chart is the basis for the Spending Wave. We know, based on data from the US Bureau of Labor Statistics, that consumer spending is largely a function of age. We spend increasingly more raising our families until our late 40s, after which time we pare down our spending and save for retirement.

In 1957, Milton Friedman made his own modifications to the Consumption Function and to the Life Cycle Hypothesis, dubbed the Permanent Income Hypothesis. Friedman’s idea was this: people base their consumer spending on what they consider their “permanent” income, or their average income over time. They do this in an attempt to maintain a relatively constant standard of living, even though their incomes may vary wildly over time. This goes a long way to explaining why Americans love consumer debt as much as they do. It’s ok to spend more that you make today, because your salary will be high enough after that next promotion to pay it all back. [Note: this was true of American attitudes in 2007; it’s far from true today, as deleveraging is the rule of the day.]

Keynes’s model, remember, assumed that people spent a constant proportion of their current incomes, i.e. each paycheck. Friedman assumes that people are forward-looking and base consumption decisions today on income expectations for tomorrow. Changes in current income, if perceived to be temporary, have little effect on spending. Friedman correctly realized that a family’s standard of living is “sticky.” When dad’s bonus check is a little disappointing one year, the family does not instantly eschew Neiman Marcus in favor of Wal-Mart. Whether for pride, concern for their children, or simple inertia, Americans are slow to ratchet down their lifestyles. Consider the case of the past six years [2001-2007]. America has suffered one of its worst bear markets in history in the wake of the dot-com bust. We had the most horrific terrorist attack arguably in world history on September 11, 2001. We’ve had two wars and a commodity boom that has seen the price of oil more than triple. Yet in spite of it all, Americans never stopped spending money [during the 2001-2007 period].  Keynes might have despaired that this behavior was irrational, but under Friedman’s model there is nothing irrational about it at all. American consumers are simply optimists who, seeing better times in the future, decide to enjoy the benefits of consumption today.

The Other Side of the Coin

Interestingly, none of these theories go into much detail on consumption as a function of age and what this implies in an aging society. Keynes’s model does not incorporate time at all, and Life Cycle theorists and Milton Friedman both assume that consumption rises in a linear fashion from birth to death. Keynes’s model may be the least dangerous in this sense, as nothing is as destructive to a forecasting model as linear thinking and extrapolation. The tendency to project current conditions into infinity leads to booms and busts. Remember the dot-com boom? It seems ridiculous now, but professional investors implicitly assumed that growth rates that were far in excess of historical norms would continue indefinitely into the future: “Our website is attracting 100,000 new eyeballs per day….”

Milton Friedman was an optimist and a true believer in the market system, and these are some of his most memorable and endearing qualities. They are what allowed the man to spread his views so effectively and radically change the world for the better. It is only natural, in Friedman’s optimistic mind, for consumer spending to march upward more or less continuously with only mild setbacks here and there. But we know that this is not true. People do indeed increase their spending for most of their lives, but once they hit their 50s they spend less on virtually everything.

Friedman is partially right, of course. A person’s income and expectation of future income clearly affects the level of consumption today. A janitor is not likely to buy a Porche, because at no time in his life will his income justify such a purchase. But how many Porches (or boats, or expensive clothes, or Rolex watches) do you see 70-year-old men buying?

These are luxury goods, of course. What about more mundane items? How many washing machines, sofas, or coffee machines does a 70-year-old man buy? Common sense would tell you that the answer is “not very many.” Is the reason, as Friedman’s hypothesis would suggest, because an elderly man realizes that his future income with which to pay for these items is modest? Or might it be for the more obvious reason that the man has already accumulated more than enough of these things in his 70 years?

Demographic trends suggest a decade-long lull in consumer spending starting around 2009 or 2010 as the Baby Boomers begin to spend less and save more for retirement. This will be a repeat, almost twenty years later, of the same scenario that Japan faced during the 1990s. When US consumer spending begins to falter, there will no doubt be plenty of economists attempting to explain the phenomenon by using some variation of Friedman’s permanent income hypothesis: “Americans are spending less money today because they see dark economic times ahead with declining incomes and standards of living….”

Then, any and every policy under the sun will be recommended on how to “fix” the problem. No doubt, Keynes’s Depression-era work will also be resurrected, and phrases like “liquidity trap” will become popular again in economic circles. [Note: Real world events followed this part of the forecast like a movie script.]

None of these ideas are likely to make much difference in spurring demand. They certainly didn’t in Japan, and there was no lack of trying. Japan eventually recovered to an extent, as the US will too. But the recovery in demand was a result of changes in demographic trends, not a policy miracle.