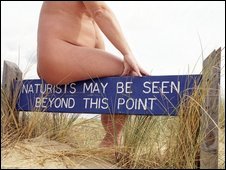 Truth is indeed often stranger than fiction. Germany, and particularly the former East Germany, has a tradition of public nudity that goes back to the early 1900s. Seven million Germans claim to regularly sunbathe in the buff, and there is even a formal organization—the German Free Body Culture—that boasts 500,000 registered nudists. Yet it appears that the era of the German nudist may be drawing to a close.

According to Reuters, “The naked sunbathers who once crowded Germany’s Baltic beaches and city parks are becoming an endangered species due to shifting demographics, the fall of the Berlin Wall, growing prosperity and widening girths.”

The number of German nudists is shrinking at a rate of about 2% per year. But then, the number of all ethnic Germans, regardless of their propensity to disrobe, is also in decline as Germany has one of the lowest birthrates in the world. Reuters reports that the number of Germans has fallen by 3.2 million over the past three decades. The population of the country has remained roughly constant only due to large scale immigration from Arab Muslim countries and Turkey—countries with much less permissive views on public nudity.

Of course, as Germany’s population shrinks it also ages, which is another factor affecting the nudist movement. Twenty-something nudists who were comfortable frolicking about in their birthday suits might be a little more modest about doing so in middle age, when family and career concerns tend to force people into more orthodox behavior.

By now you might be wondering: What does this have to do with my investments?

The truth is, it has everything to do with your investments. Demographics are the underlying macro force that drive everything from corporate profits to school enrollments to pension solvency—and yes, German nudity as well.

As the American Baby Boomers continue to downsize their spending habits in preparation for retirement, they will continue to act as a giant brake on the U.S. economy. Each dollar saved by a Boomer is a dollar not spent in the economy, which means lower corporate profits and higher unemployment. This is a major reason why the Great Recession that started in 2008 has lingered as long as it has and why it will continue to linger for years to come.

It is also worth mentioning that one of the key sticking points in the debt-ceiling negotiations between the House of Representatives and the President was the insistence among some republicans on addressing the looming funding crisis in Social Security and Medicare. The retirement of the Boomers is going to put enormous strains on these programs, and while there are opposing views about what should be done about it, it is at least good that the issue is being raised.

Not all demographic news is bad, of course. Looking at more positive trends, we see that American births are near all-time highs and that children’s clothes and toy stores are full—even in a recession. The children of the Baby Boomers are now having children of their own, creating incredible opportunities for those catering to the needs of new parents.

As investors, we should always keep the demographic big picture in mind when allocating our precious capital. There are great opportunities out there, even in a deep recession. Of course, an investment in a German nudist resort is not likely to be one of them.

This e-letter is a free service of Sizemore Financial Publishing LLC, publisher of the Sizemore Investment Letter, a monthly subscriber-only newsletter.