3M ($MMM) is a homely company.  There is nothing sexy about scotch tape or Post-It notes.  Or Ace bandages or Scotch Bright for that matter.  We’re talking about adhesives and cleaning supplies, for crying out loud.  No matter how hard you try, there is no way to make these items anything other than boring.

And as an investor, I’m ok with that.

Men are notorious for letting a beautiful woman impair their judgment.  But the same is true of beautiful stocks.  Think of recent “attractive” stocks that have led many an investor to ruin: Apple ($AAPL) and Facebook ($FB) are two that come to mind.  Like a glamorous date, it’s nice to be seen in public with an “it” stock.  But chances are good it won’t be good for your wallet or for your long-term peace of mind.

This is not a stock you will ever brag about owning at a cocktail party.  But frankly, you should.  The stock has quietly pushed to new all-time highs, and it is beating the S&P 500 by a wide margin year to date. 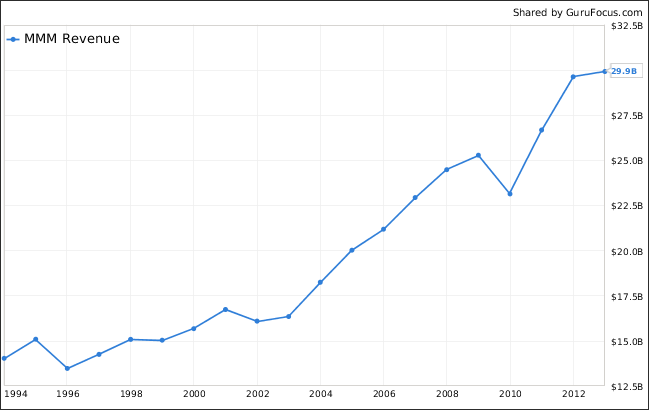 But while 3M’s stock price performance has been spectacular, I’m more interested in the business and its consistency.   3M does quite a bit more than tape and sticky notes.  They make everything from the reflective films that cover traffic signs to insulation for airplanes.  But all of their products have a couple things in common:

Like all companies, 3M has some amount of sensitivity to the business cycle. If a company is shedding headcount in a bad economy, it’s probably not stocking up on office supplies.  But 3M’s revenues are remarkably consistent, and other than a brief blip in 2009, the company sailed through the crisis and its aftermath with barely a scratch.

3M’s consistency is also shown in its dividend payments.  The company has continuously paid a dividend for 97 years, and it has increased its dividend every year since 1959.  Its current dividend yield of 2.3% may not be extraordinary, but the dividend has doubled since 2002.  Had you bought 3M in 2002, you’d be enjoying a yield on your original investment of about 5%.  Again, not extraordinary, but not half bad either.

3M will never double your money in a year, and you’re certainly not going to get rich quick owning it.  But it’s one of those stable, consistent holdings that will quietly chug along, throwing off dividends, and never give you trouble.

If bought at a reasonable price, it’s also a stock that would be difficult to lose money owning over any reasonable time horizon.  And at 15 times expected earnings, I would say its pricing is anything if not reasonable.

Disclosures: Sizemore Capital has no positions in any stocks mentioned.