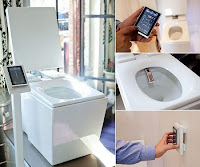 Kohler, the American plumbing fixtures manufacturer, now sells the $6,400 Numi luxury toilet (see photo). Driven by the demanding tastes of China’s newly wealthy, the Numi features a heated footrest and a “sleek iTouch style remote,” according to the Financial Times, that controls an internal music system, the adjustable bidet, and the temperature of the seat. It also allows the user to play video games, read e-books, and call friends on Skype. The press release didn’t elaborate on whether or not Skype’s video conferencing features are enabled; I sincerely hope that they are not.

Though this story may seem absurd, there is one serious point to take away. Historically, Western luxury goods firms have sold items to China and other emerging markets that were originally designed for American and European tastes. This is changing. Suffice it to say, Americans are not interested in Skyping each other while sitting on the can. The Numi is a very expensive piece of engineering built by an American company specifically with a Chinese consumer in mind.

Separately, the Italian luxury group Prada has decided to go forward with its initial public offering. But rather than list the shares in Milan—or even London or New York—Prada has opted for Hong Kong. In floating its shares in Asia rather than its home market, Prada is making a very public statement of where the company sees its future. Investors, take note.

Three Ways to Profit From China’s Love Affair With Luxury

Unfortunately, Kohler is not a publicly-traded company so we cannot profit from the revolutionary Numi toilet. We can, however, profit from the seemingly insatiable appetite for high living by the nouveau riche in China and other emerging markets.

We’ll start with the world’s largest purveyor of premium spirits, the UK-based Diageo PLC (NYSE: DEO), which trades in New York as an ADR.

Diageo has the number one premium scotch whisky in the world by sales in Johnnie Walker, and the number one premium vodka in Smirnoff. In Tanqueray gin, Bailey’s Irish Cream, Jose Cuervo tequila and Guiness Irish stout beer, Diageo enjoys category leadership. Other brands of note include Captain Morgan rum, J&B scotch whisky, Crown Royal Canadian whisky, and the high-end Ketel One vodka.

Diageo already gets a third of its revenues from emerging markets, and the company has recently stepped up its already aggressive marketing campaign in China. China is an enormous market for premium spirits, yet it remains almost virgin territory for Diageo’s Scotch whisky brands. According to International Wine and Spirits Research Magazine, cognac and the French brandy Armagnac account for 66 percent of the value of all imported spirits, while Scotch whisky has only a 29 percent share. And even within the Scotch category, Diageo’s Johnny Walker brand trails Pernod Ricard’s Chivas Regal. As of 2010, Chivas Regal has a 37.5 percent share of the whisky market by volume, while Diageo had 27 percent.

The bottom line here is that there is plenty of room for growth in China, and Diageo’s massive marketing machine puts it in good position to grab market share.

At 17 times earnings, Diageo trades at a premium to the broader market. I’m ok with that. This is a company with returns on equity of nearly 40%, manageable levels of debt, and unbeatable exposure to emerging markets. Diageo is a “Buy.”

Next on the list is women’s luxury handbag maker Coach (NYSE: COH).

Coach has been a high-performer in recent years, and it is easy to understand why. The company is an absolute money-minting machine. It enjoys returns you would normally only expect from mafia businesses and yet—unlike so many high-profile blow-ups of 2008 and 2009—Coach did not take on excessive debts to achieve those returns. In fact, the company is net debt free, yet it manages to produce a return on equity of an eye-popping 51%.

Coach continues to impress. The company recently raised its quarterly dividend by 50% and has authorized the repurchase of 1.3 billion shares.

Right now sales in China and the rest of the developing world are still quite modest, but they are growing fast. The company expects to have sales of over $500 million in 2014 in China alone and plans to open roughly 30 new stores per year there from its current base of 52.

Coach remains one of my favorite picks in the luxury retail sector both as a direct play on America’s well-to-do and as an indirect play on the rise of China’s nouveau riche.

Though it may seem somewhat risky to invest in an auto company given the still precarious state of the global economy, consider that Daimler’s core customer base has weathered the storm quite nicely. Earnings were up by almost 60% last quarter, and the stock trades at a very modest 10 times earnings and 0.5 times sales.

Meanwhile, sales volumes to China were up 56% in April over the prior year, and the flagship S-Class sedan saw a stunning 111% increase. China is already Daimler’s biggest market for the premium S-Class and the company’s third-largest market overall. Not bad indeed.

With renewed concerns about a European sovereign debt crisis shaking investor confidence, Daimler shares have fallen sharply over the past month. I would view any additional weakness as an excellent buying opportunity.

The Chinese stock market is not well regulated and is widely (and justifiably) believed to be risky. The good news is that Western investors can avoid Chinese stocks but still profit from the rise of China and its new generation of wealthy citizens indirectly by buying shares of established American and European firms that have their hand on the pulse of the affluent Chinese consumer. And if you buy the new internet-enabled Numi commode, you can even do so from the comfort of your own bathroom.

This article is an excerpt from the June 2011 issue of the Sizemore Investment Letter.