Here’s a little fact that will blow your mind. In Iran, you can get married for an hour and then divorced, no strings attached. It’s the sigheh, or “temporary marriage” (sometimes called the “pleasure marriage.”)

In a sigheh arrangement, the duration of the marriage and the dowry are specified in advance, and once the time period elapses, be it an hour or a year, both parties are free to go their separate ways.

I couldn’t make this stuff up if I wanted to. In theocratic, hardline Iran, there is a religiously-sanctioned hookup culture.

Based on shifting demographic trends in Iran, it appears that Iranians have gotten a little too comfortable with temporary marriage and have decided to forgo the traditional kind.

Last week, I wrote about China’s pending mother shortage and what it means for China’s economy in the decades ahead. Along those same lines, today I’m going to turn a popular misconception about Iran on its head.

There is a widespread belief in the West that we’re being “outbred”  by unstable countries that are hotbeds for terrorism, particularly in the Islamic world. To an extent, this is true. The average woman in Afghanistan, Iraq and Yemen, to pick three high-profile examples, can expect to have 5.1, 4.1 and 4.2 children in their respective lifetimes.

Iran had similarly high birthrates…before the Islamic revolution of 1979. 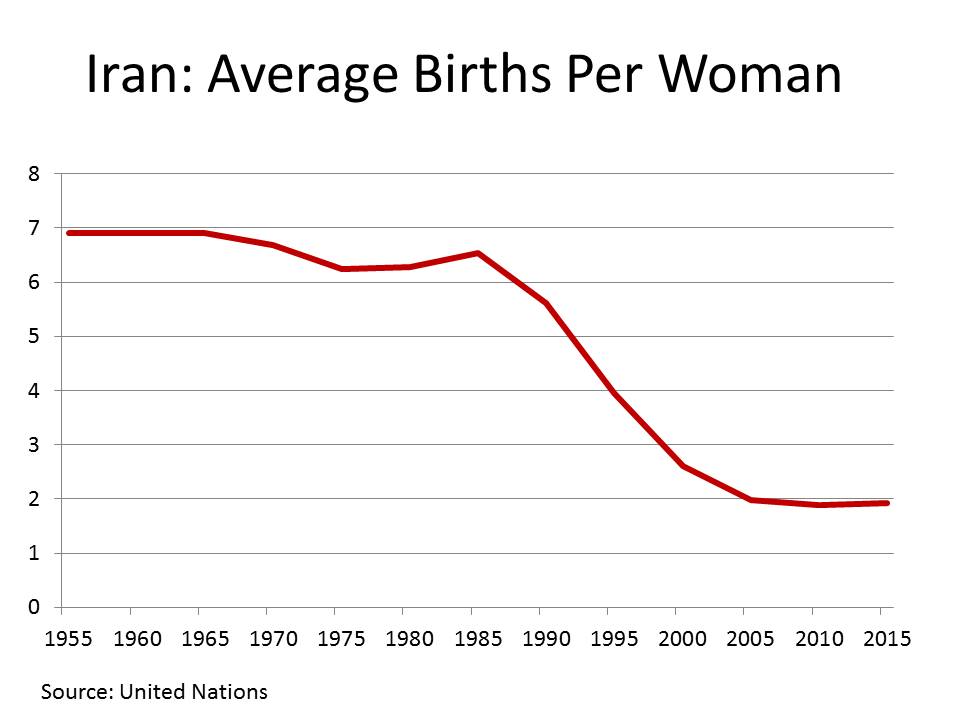 Ironically, Iran had much higher birthrates before the revolution, when it was officially a western-allied nation and women walked the streets freely with their heads uncovered. But just six years after the mullahs took over, the fertility rate collapsed. By 2005, it had fallen below the population replacement rate.

Today, at 1.9 children per women, the Iranian fertility rate is equal to that of the U.S. and actually lower than that of France!

Divorce has a way of putting the brakes on family size, and about one out of three marriages in Tehran now end in divorce. For better or worse, Iran is starting to look a lot more “Western,” at least when it comes to family life.

Iran won’t be a rogue state forever. We probably won’t see real political change while Ayatollah Khamenei, Iran’s supreme leader, is alive and kicking. But he’s also 75 years old and won’t be around forever. Change will come, and a lot sooner than most people realize.

Will the mullahs give up power without a fight? Probably not.  And Iran may never have a full-blown revolution and regime change. But as Iranian society changes, I expect the government to at least subtly tone down its anti-western rants and to start behaving like a “normal” country.

Charles Lewis Sizemore, CFA, is chief investment officer of the investment firm Sizemore Capital Management and the author of the Sizemore Insights blog