I could never live in Scandinavia.  The long winters would drive me stark-raving mad.  And for a guy who has driven all the way to Mexico because he needed a good street taco, the blandness of the food would prevent me from ever being happy in Europe’s great white north.

Yet it seems that the people that live there seem content enough.   In the 2012 Legatum rankings of the world’s happiest and most prosperous countries, Norway, Denmark and Sweden took the first three spots, and Finland took 7th.

As a point of reference, the United States took 12th place, below even Canada, which came in 6th.  It appears that excessive use of mayonnaise and a love of hockey are the secrets to prosperity and happiness. 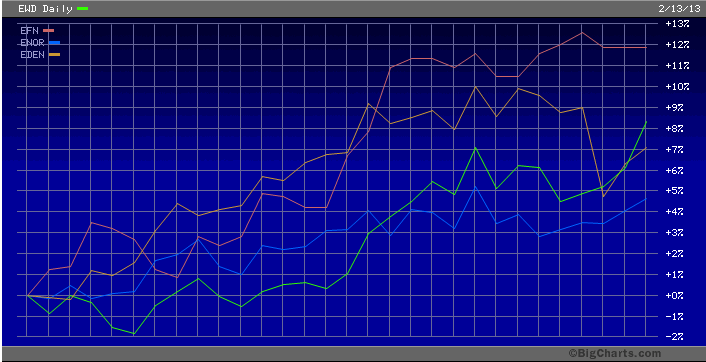 In any event, Scandinavian stockholders have a lot to be happy about.  The Nordic countries have by and large avoided the worst aspects of the Eurozone crisis.  It helps, of course, that  Norway is not an EU member state and that Denmark and Sweden currently do not use the euro currency.  But their low debt levels and responsible governance go a long way too.  And along with the UK, the Nordics have been the loudest supporters of free trade and open markets in the European Union.

Let’s take a peek at the ETFs that focus on Scandinavia starting with the iShares MSCI Sweden (NYSE:$EWD).   EWD has a lot of the names you would expect—Ericsson (OTC:ERIXF) and Volvo (OTC:VOLVF) are major holdings, as is retailer Hennes & Mauritz (better known as H&M).  The three collectively make up a quarter of the ETF’s holdings.

Banks take another quarter of the ETF with most of the rest in industrials and technology.  All in all, EWD is not a bad way to get exposure to a collection of high-quality European names located safely outside the Eurozone.

As with the Swedish market, the Norwegian market has a decent-sized allocation to banks.  But with its vast North Sea oil assets, Norway is first and foremost an energy play.  Energy makes up nearly half the fund’s portfolio, and Statoil ASA (NYSE:$STO) is the largest holding, taking up nearly 20% of the portfolio. Telecom provider Telenor ASA (OTC: TELNY) accounts for another 10%.

I hesitate to say too much about the iShares MSCI Denmark (NYSE:$EDEN) and the iShares MSCI Finland (NYSE:$EFNL) ETFs because they are too thinly traded for me to recommend in good faith.  Both also have so little under management (less than $5 million) that I would consider both at risk of closing before year end.

If you want to invest in Danish or Finnish companies, you might do better going the individual stock route.  Danish Carlsberg AS (OTC:CABGY), the fourth largest beer brewer in the world, is a backdoor way to play growth in Russia and Asia.  Among global brewers, my preference remains Heineken (OTC:HEINY) due to its greater exposure to the frontier markets of Africa.

Among Finnish stocks, the only one with any volume at all in the United States is beleaguered mobile phone maker Nokia (NYSE:$NOK).  I like Nokia as a turnaround play, but I acknowledge that it’s risky and highly dependent on the success of its Microsoft (Nasdaq:$MSFT) Windows Phones.

Finally, if you’re looking for a diversified mix of the Nordic countries, the Global X FTSE Nordic Region 30 (NYSE:$GXF) is an option, though its trading volume is a little on the low side.