Harley-Davidson, Inc. ($HOG) is an American icon.  It’s also a well-managed company and one of those true rarities: a successful turnaround story.  This is a company that was facing bankruptcy in the early 1980s yet managed to rebuild itself into the pride of American manufacturing…and the subject of countless case studies in MBA programs worldwide.

Harley’s management was able to pull off that coup by leveraging that intangible quality that is so hard to imitate: brand cachet.  For a particular breed of leather-wearing motorcycle enthusiast, there is simply nothing on par with a Harley.

But all of that said, I wouldn’t touch the stock, or at least not at today’s prices.

At first glance Harley wouldn’t appear exceptionally pricey.  It trades for 17 times trailing earnings and 2 times sales.  This compares to 16 times earnings and 1.5 times sales for the S&P 500.

A modest premium is appropriate for an iconic company with Harley’s branding power (and not to mention its high return on equity of 25.8%), right?

Well, maybe.  But Daimler ($DDAIF)—a company that knows a thing or two about vehicle branding—trades for just 10 times earnings and 0.42 times sales.  Yes, I realize it’s not an apples-to-apples comparison and that Harley runs a higher-margin operation in a business with fewer direct competitors.  All else equal, Harley should trade at a slight premium to a larger automaker like Daimler.

But all else is not equal, and Harley has a serious growth problem.  And it’s not one that will go away with a recovering economy. 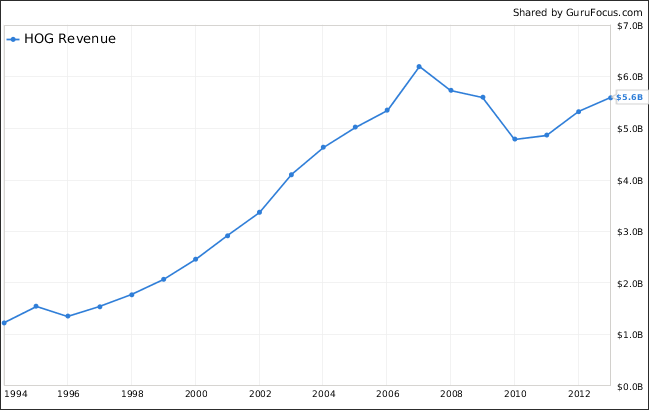 To be fair, revenues and unit sales have enjoyed a nice bounce since the pits of the financial crisis.  But Harley will never get its old mojo back for one critical reason that is completely outside the control of management: demographics.

Down the road from my house in Dallas, there is greasy drive-in burger joint called Keller’s…a place I’ve been known to frequent a little more often than my doctor might recommend.  On any given weekend, you might see a dozen or more bikers parked in the lot, showing off their chrome-laden Harleys.  And nearly all of them are over the age of 45. Most are over 50.

This isn’t a coincidence.  Harley Davidson is a brand whose sales depend disproportionately—for that matter, almost exclusively—on middle-aged Caucasian males.  Riders younger than 40 generally lack the time, interest, or the bankroll to buy a Harley.  But by the time they get into their 60s or older, the noise and joint pain have begun to make riding lose its allure.  You may still ride in your 60s, but you’re doing it less frequently and you probably aren’t buying a new bike. 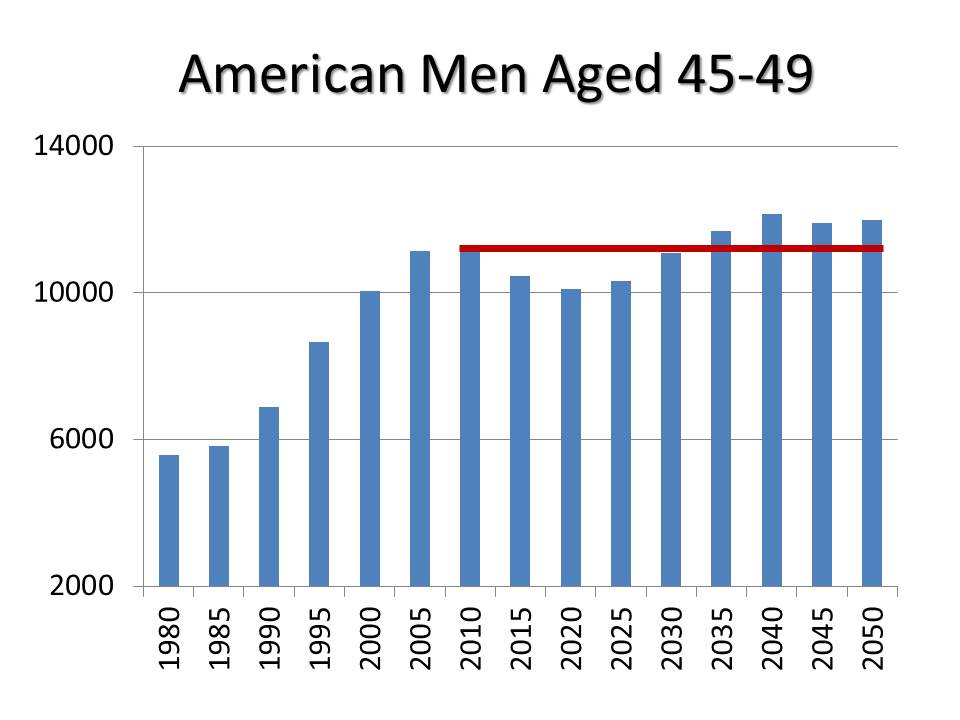 The sweet spot is the mid-40s to early 50s.  And with the Baby Boomers—the largest and wealthiest generation in history—now largely aged out of this key demographic bracket, Harley has a serious problem.  Generation X—my generation—is not nearly large enough to pick up the slack, and Generation Y (aka “the Millennials” or “Echo Boomers”) are decades away from being in the demographic sweet spot for Harley.  The number of American men aged 40-49 is set to decline through the early 2020s and won’t reach its old 2010 peak until 2035.

CNN Money reported on this as far back as 2010, and demographic strategist Harry Dent—my old boss—has used Harley as a case study for decades.

Harley Davidson’s management is not stupid.  They understand the issues they face, and they have gone so far as to address it with a dedicated page on their Investor Relations site: Harley Davidson Demographics.  The company has aggressively expanded its marketing efforts to attract younger men, non-Caucasian men, and women and has had modest success.  Per the demographic site, management writes “In 2012, U.S. sales of new Harley-Davidson motorcycles to our ‘outreach’ customers — young adults 18-34, women, African-Americans and Hispanics – grew overall at more than twice the rate as sales to our traditional U.S. customer base of Caucasian men, ages 35-plus.”

But realistically, there is no replacing the white Boomer male.  And this means a very rough decade ahead for Harley Davidson.

Stocks in industries in gentle decline are not necessarily bad investments, as tobacco stock investors have no doubt noticed (see “My Favorite Tobacco Stock is…Intel?” and “Can E-Cigarettes Relight Big Tobacco”).

Under the right set of circumstances—strong financial health, large barriers to entry, good dividend growth and share buybacks—stocks in no-growth industries can make better investments than those in high-growth industries.

But for this to be the case, the stock has to be priced appropriately.  Big Tobacco has had a great decade-long run because it started out cheap and hated and paid a monster dividend.  Harley Davidson, in contrast, trades at a slight premium to the market and yields only 1.7%.

Harley Davidson may be a good buy—eventually. But given the demographic headwinds it faces, it’s not cheap enough for serious consideration at this time.