Well, yes, they do.  But not necessarily for the reasons Ms. Tett expects.

Think of it this way: Here in the United States we hear about the next great generation—the Millennials (also called Gen Y and the Echo Boomers)—and how they will shape the country in the decades ahead.  Numerically and culturally, they are the most important generation since the post-war Baby Boomers.

Well…let’s just say that no such sentiment exists in Germany, Italy or Spain.  None of these countries had a secondary baby boom in the 1980s and 1990s.  The young personalities dominating the discussion here were simply never born in Europe. 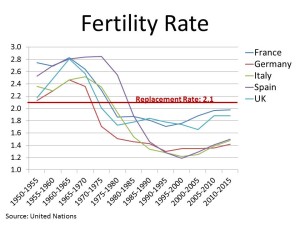 Of course, young workers that were never born will not be able to pay taxes or man the factories of tomorrow.  This is the point that Gillian Tett makes, and it is a valid one.

But it also happens to miss the very large elephant in the room: Workers can be replaced by automation and outsourcing; consumers cannot.  To carry this a step further, General Motors or Ford can program a robot to build a car.  But that robot has no interest in buying a car.  And as roughly 70% of the modern economy is consumer spending, that’s a big problem.  Without a steadily growing population, the modern consumer economy breaks down.

I’m not picking on Ms. Tett; she has a much better grasp of the importance of demographics than most journalists, and she has clearly done her homework.  But virtually everyone in the economics and investment professions that follows demographics (yes, there are a surprising number of us) focus their energies in the wrong places. They focus almost solely on supply.  Demand—when it is considered at all—is viewed as a byproduct; something that just happens on its own (For the geeks in the room, this concept has a name: Say’s Law).

This is not an academic argument about how many angels can balance on the head of a pin.  It matters because the focus on production and boosting GDP growth is actually counterproductive in a world of aging and shrinking populations.  Boosting supply during a period of slack demand simply causes deflation…which in turn discourages future investment and creates a debtor’s nightmare.  Just ask Japan.

Japan’s is further along the path of demographic decline than Europe.  It has the oldest population in the world, and adult diapers are now a more promising growth business than infant diapers.    Japan also happens to have the largest debts in the world, fast approaching 240% of GDP.

Japan’s leaders have effectively spent their country into insolvency with Keynesian deficit spending and have nothing to show for it.  Sure, Japan has great roads and infrastructure.  But it’s all for naught if there are no Japanese citizens left to use them.

Given all of this, you might be surprised to hear that I am actually bullish on Europe, at least in the short term.  European companies are, on average, quite a bit cheaper than their American or Japanese counterparts, and I expect investors to warm up to Europe as the threat of meltdown continues to recede.  Furthermore, Europe is finally starting to see those first green shoots of growth; in the past week, the Spanish unemployment rate fell for the first time in two years, and European oil demand is on the rise—again, for the first time in two years.  As better economic news continues to drip in, I expect investors to reevaluate Old World stocks.

But at the same time, I recommend you choose your European investment carefully.    Focus on companies that are domiciled in Europe but that get the bulk of their revenues overseas.  In my last article, I mentioned Dutch brewer Heineken (HEINY) for its outsized exposure to developing Africa.   Unilever (UL) and Nestle (NSRGY) are also fine additions.  Both have relatively modest exposure to the European markets and both are well positioned to benefit from rising living standards in emerging markets.

Unilever and Nestle also happen to be holdings in my “Drip and Forget” dividend investing strategy, and Heineken is a current recommendation of the Sizemore Investment Letter.

SUBSCRIBE to Sizemore Insights via e-mail today.  This article first appeared on InvestorPlace.