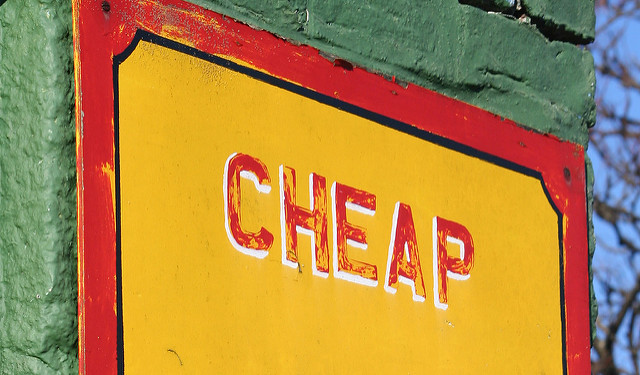 The following is an excerpt from 7 Cheap Dividend Stocks to Buy for $20 or Less.

I have a well-deserved reputation as a cheapskate. I brown bag my lunches most days, keep my thermostat at 79 degrees, and — if my wife doesn’t intervene — I’ll generally wear my clothes until they’re moth-eaten and threadbare. I’m good with that. As Benjamin Franklin said, a penny saved is a penny earned.

Perhaps not shockingly, I take the same approach in my investing. I like cheap stocks and, specifically, cheap dividend stocks. I like getting paid in cold, hard cash, after all.

Now, as a general rule, price and value are two very different things. For example, Apple Inc. (AAPL) trades for well over $150 per share. But considering it trades for just 14 times estimated 2017 earnings, I’d argue it’s one of a handful of truly cheap dividend stocks to buy in an otherwise expensive market. At the same time, Snap Inc (SNAP) trades for less than $13 per share, barely half its IPO price … yet I’d argue that the profitless piece of junk is still too expensive.

But sometimes a stock that has a cheap share price really is a cheap stock. And today, we’re going to take a look at seven cheap dividend stocks to buy, all of which are trading for less than $20 per share. With a hundred dollar bill, you could buy at least five shares of any of these and still have cash left over.

I’ll start with American auto giant Ford Motor Company (F). Like poor old Rodney Dangerfield, Ford gets no respect these days. The stock trades at a pathetic $11 per share, which amounts to just seven times earnings and 0.29 times sales.

That’s not just cheap — that’s going-out-of-business cheap. Yet Ford today is, ironically, in its best financial health in decades. Yes, sales are down this year, and estimates have been consistently pushed lower. But you have to remember that last year was a record year and that some sort of pause was inevitable.

And for crying out loud, Ford’s sales are hardly in the dumpster. Sure, unit sales were down 7.5% last month. But this was driven mostly by a drop in lower-margin sedan sales. Higher-margin SUV sales were actually higher for the month. And analysts are still expecting total industry sales to top 17 million for full-year 2017. That’s slightly lower than last year’s number, but very much in line with the boom years the mid-2000s.

Ford yields and attractive 5.4% at current prices, making it one of the cheapest dividend stocks to buy today.

To read the full article see  7 Cheap Dividend Stocks to Buy for $20 or Less.