“Across the Middle East, where Christianity was born and its followers once made up a sizable portion of the population, Christians are now tiny minorities,” writes Kristen Chick. “Driven by different factors — the search for better opportunities abroad, their status as targets of Iraq’s sectarian conflict, a low birth rate, and discrimination — the trend largely holds true across a region where Christians have maintained a presence for two millenniums.” — From “The Wane of Christians in the Mideast,” Christian Science Monitor print edition, January 24, 2010.

The demographic changes happening in the Middle East have interesting implications for the economic development of the region, not to mention the geopolitics as well. We’ll cover some of these trends today.

Ms. Chick’s article reminded me of several long conversations I’ve had with a Jordanian friend, a doctor from that country’s small Christian minority. Not to play on stereotypes, but many of these conversations were had over the requisite hookah (a water pipe used for smoking flavored tobacco for those unfamiliar with the word).

His life story is typical of his coreligionists across the region. His name, “Ala’a,” is an old Arabic name that predates the rise of Islam (“Aladdin,” from the Arabian Nights

, is a more recent Islamic variation of the name). But to untrained Western ears, “Ala’a” is indistinguishable from the Muslim name for God, “Allah.” It’s hard enough to explain to a layman that “Arab” and “Muslim” are not the same thing without your Christian name sounding like Muslim God.

For a variety of reasons, including, among others, a higher level of education than the general population and the legacy of the relationship between the old European colonial masters and the Christian Arabs, the Christians in the region have birthrates that are close to European lows, while their Muslim countrymen have birthrates that are significantly higher. You don’t have to be a mathematician to understand that this means that the Christian subpopulation will become an increasingly smaller minority over time. Add to this the issue that, in some countries, it is legal (and convenient) for a Christian to convert to Islam but illegal (or functionally impossible without putting yourself at serious risk) for a Muslim to convert to Christianity, and you can quickly see that the odds do not favor the Arab Christians.

Emigration is another serious issue. With better opportunities elsewhere, the young men often leave. Some return years or decades later, but the problem remains that there are many young women of marriage age who are competing for a shrinking pool of eligible bachelors. “This wouldn’t be a problem” jokes Ala’a (at least I think he was joking; I never really know with this guy…), “if we could all have multiple wives like the Muslims. But you could never put two Christian Arab women under the same roof. They’d kill each other…and probably kill me too in the process.”

All joking aside, perhaps some of these women should learn Mandarin Chinese — China has its own gender imbalance issues, as we’ve written before.

Meanwhile, the numbers continue to get worse, as you can see in the chart below. 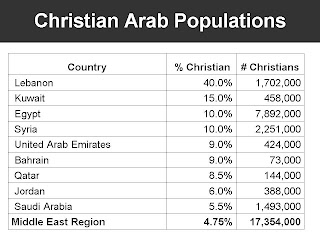 In the early 20th century, Christians made up about 20% of the population of the Middle East. As a point of reference, that is roughly equal to the combined percentage of Asians and Hispanics in the United States today. One out of five people walking the street was a Christian Arab. Outside of Lebanon, the percentage is quickly shrinking to the point of irrelevance; across the region it has shrunk to less than 5%.

What are the implications of these trends? There are many, and none are good. The existence of Christian Arabs creates a point of commonality between the West and the Islamic world; without them, the “us vs. them” mentality becomes all the stronger. As Chick states in her article, “As Christians leave the Middle East, some worry they will leave behind an increasingly polarized society. When members of different religions or sects live side by side, they are more likely to see each other as people and not adversaries.”

The Arab Christians also offer a liberalizing influence. Unless forced to veil themselves out of concern for their safety — a growing problem in Egypt, for example — Christian Arab women wear western clothes and would appear indistinguishable from Greek women to most outside observers.

But perhaps the biggest loss would be economic. When Queen Isabel expelled the Muslims and Jews from Spain in the 15th century, the chief beneficiary was the Ottoman Empire. Spain lost some of its best craftsmen and traders, many of whom were Jewish. Until the advent of Turkish nationalism in the late 1800s / early 1900s, the Ottomans benefited handsomely from the skills these refugees brought from Spain and from the skills of their own minorities, mostly Greek Orthodox Christians. When the Ottoman Empire was dismembered after World War I, the rump of the empire became a Turkish nation state — and it sorely missed the commercial ties and professional expertise of its former minority subjects.

Might the same be happening in the Arab world today? You bet. Even as educational standards are improving in the region, it takes years to develop networks and business relationships. “Good ol’ boy” connections, as we call them in the South, require the presence of good ol’ boys — the established power brokers and gatekeepers — and these connections are slowly getting dismantled.

I’m speaking in vague generalities, of course. But I do believe that these demographic trends will make a real difference in the continued development of the region. Unfortunately, this isn’t a testable hypothesis because we can never know what might have been. At the very least, we can consider this one of several significant factors that will affect the future of the Middle East.