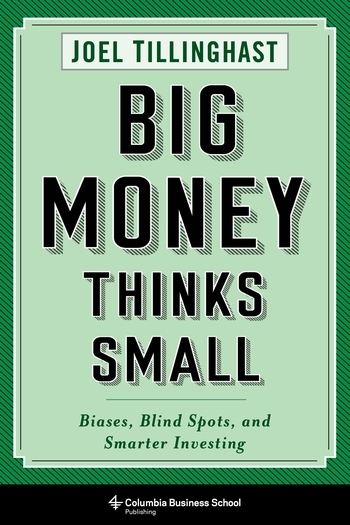 Joel Tillinghast is not a household name, even among active investors.

Tillinghast is the manager of the Fidelity Low-Priced Stock Fund, and he’s beaten both the S&P 500 and the Russell 2000 by 4% per year since 1989. And while 4% might now sound like a large number, it makes an enormous difference compounded over time. A dollar invested with Tillinghast in 1989 would have grown to $32 over the past 27 years, whereas that same dollar invested in an index fund would have grown to $12.

So, Tillinghast is a manager you should take seriously. And in Big Money Thinks Small: Biases, Blind Spots, and Smarter Investing, Tillinghast shares some of the tricks of the trade he’s used over the past three decades.

Tillinghast breaks the investment process down into five basic principles:

Making decisions rationally sounds obvious, but it can be exceedingly difficult in the stock market. As Tillinghast puts it, “…the folklore of stock exchanges has depiscted them as crowded, anonymous carnivals of mass delusion and mayhem, with a whiff of sin. In a venue where avarice and envy are constants, no one expects decisions to be morally ideal.”

That’s not exactly an ideal environment for thoughtful, detailed stock research… which is why so few investors succeed.

Tillinghast walks us through some of the psychological minefields first explored by Daniel Kahneman and Amos Tversy, who are considered to be the pioneers in behavioral finance. But he stops short of throwing human active managers completely under the bus and using purely mechanical investing strategies. As he puts it,

“Given all these oh-so human frailties, some argue that rules-based investing by the numbers is the solution. I don’t fully agree. Algorithms, bots and screens do take the emotion out of investing… [But] I worry that quants forget that stocks are not just numbers but part ownership of businesses, run by people. For now, I think humans are better at gauging whom to trust and visualizing how societies, institutions, and technology might interact and evolve. My ideal is Spock: half human, half Vulcan.”

Tillinghast’s advice to invest in what you know echoes Peter Lynch, the legendary manager of the Fidelity Magellan fund. And interestingly, it was Lynch who got Tillinghast hired by Fidelity in the 1980s.

“Buy what you know” is one of the most misunderstood nuggets of wisdom I’ve ever encountered. No successful investor buys a stock simply because they know or like its products. Warren Buffett didn’t buy Coca-Cola because he likes Cherry Coke.

Buying what you know means investing within your core areas of competence. This comes into play later, in avoiding businesses prone to obsolescence and financial ruin and in valuing stocks correctly. These last two principles are impossible without an in-depth understanding of the business and industry.

And speaking of valuation, Tillinghast relies heavily on the earnings yield (the inverse of the P/E ratio) and on the Shiller P/E or CAPE. He tends to keep his valuation analysis simple, as additional complexity generally just increases the odds of failure.

Perhaps Tillinghast’s best advice is to be comfortable with ambiguity and failure, as being right 55% of the time is actually really good in the world of investing. As he puts it, “…during raging, thematic momentum bull markets, I lag pathetically.”

That’s important to remember. Even the greatest investors get it wrong quite regularly and often underperform their benchmarks for long stretches. So longevity in this business often comes down to embracing failure and learning from mistakes.

If you want to better understand value investing, pick up a copy of Tillinghast’s Big Money Thinks Small. My compliments to the author on a solid, well-researched book written from decades of experience.