The following is an excerpt from an article I originally wrote for InvestorPlace. 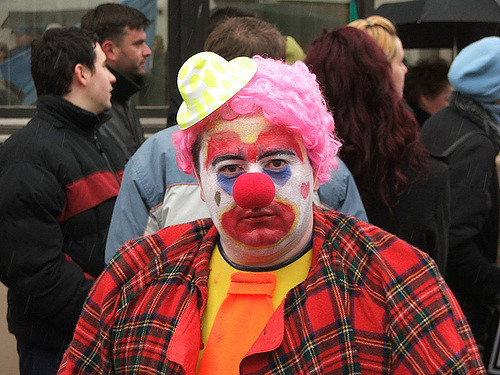 There is nothing more dangerous than an “obvious” investment. Markets being what they are, by the time an investment “obviously” looks good, most of the good news is already priced in … and any whiff of less-than-perfect news can be enough to send the share price tumbling.

I really believe that. So I’m choosing the words I’m about to say very carefully: At current prices, Apple (AAPL) is quite possibly the most obvious buy I’ve ever seen in my lifetime. I would go so far as to say that Apple is so cheap right now, it is actually ridiculous … as in stark-raving mad lunatic ridiculous. Were Apple CEO Tim Cook to actually wear clown makeup and juggle bowling pins while riding a unicycle during the next conference call, the pricing of Apple stock would be no more ridiculous than it is right now.

I know, I know. I just finished telling you that “obvious” investments rarely seem to work out as planned. But it seems that while I am focusing on the obvious cheapness of Apple stock at today’s prices, Mr. Market is fixated on the obvious slowing in iPhone sales.

Yes, iPhone sales are slowing. We all knew this day would come, particularly after the iPhone 6 windfall. But the market was pricing Apple as a no-growth company even before the recent collapse in the share price. Let’s play with the numbers a little.

Apple stock trades for 10 times earnings. Stripping out the cash, which accounts for more than 40% of Apple’s market cap, you get a P/E ratio in the mid-single digits.

Yes, yes. I realize that most of that cash is offshore. So let’s chop its value in half. You’re still looking at a company with a P/E ratio in the high-single digits.

Now, a low valuation by itself doesn’t really mean much. Plenty of companies are cheap for a reason, and slower-growth companies should command a lower multiple.

But shouldn’t Apple stock at least trade in line with slow-growth behemoths like Procter & Gamble (PG) or Kimberly-Clark Corp (KMB)?

Charles Sizemore is the principal of Sizemore Capital. As of this writing, he was long AAPL.